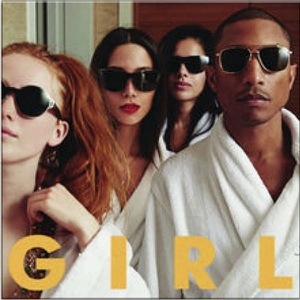 2013 was arguably the year of singer/producer Pharrell. Ruling the summer with mega hits Blurred Lines and Get Lucky whilst taking over the winter with the despicable me penned track Happy.

On Monday 3rd of March, Pharrell releases his sophomore solo album GIRL. Whilst older fans of Pharrell such as myself, expect an album full of Epic hip hop style beats which would further leave us marvelling at his amazing production. Newer fans of Pharrell however would potentially expect big catchy songs similar to Get Lucky and Happy.

Having heard the album I was very surprised with how female oriented the album was. It was a very celebratory album towards women and Pharrell frequently throughout GIRL talks about his love for the opposite sex. Is this an deliberate attempt to try and shake off the negativity that Pharrell along with Robin Thicke and T.I received with Blurred Lines?

Pharrell however should be applauded for his work on this album. From the albums opener Marilyn Monroe which is a strong song with an epic production, especially with the fact Hans Zimmer produced the string section of the song. Throughout this song the singer name checks a lot of strong female women of the past. Hunter is an song written from a females perspective about love. As well as the epic production on Gust of Wind which was co-produced by Daft Punk

The song however which shouts next single is Brand New which features Justin Timberlake. It sees the duo trading falsettos over an epic song that will have you singing and bouncing along to it.

Overall this is an enjoyable album and one that I feel shows Pharrell’s growth as a solo artist whilst showcasing his amazing song writing and production skills.