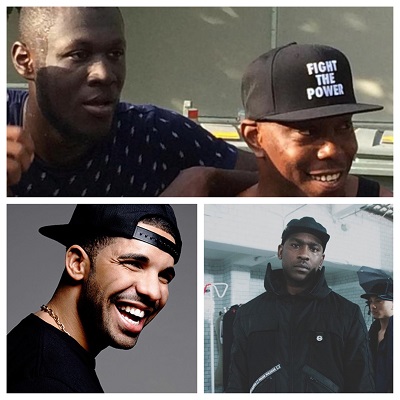 Unless you were living under a social media rock this weekend, you would have noticed two big things that happened at Wireless this weekend. The first was Drake bringing out Skepta and the other was Stormzy who brought out Dizzee Rascal. Both moments had filled up my timeline on twitter but which one was a bigger moment?

Drake bringing out Skepta had been the topic of conversation since it was announced that the Canadian rapper would headline the London festival. Drake has always spoken of his appreciation for the UK in general whether that’s his use of language, fashion or most noticeably its musicians. The rapper spoke about how Sneakbo influenced him and he used those influences on his Take Care album. This time however he had been bigging up Boy Better Know’s Skepta. This felt like a huge co-sign from arguably the biggest rapper world and Skepta used a little sample of Drake on Shutdown, Drake performing with Skepta, shouting him out, wearing his BBK merchandise will no doubt internationally help the profile of Skepta and the scene. So it might be a silly question as to ask who had a bigger impact.

Stormzy however bringing out Dizzee Rascal for me just felt massive. We didn’t expect it at all unlike Drake and Skepta. Dizzee arguably is the biggest rapper in the country even though he has been quiet the last few years but the reaction the crowd gave when he came out shows that he is still seen as a legend in the UK. I feel that in the UK Stormzy bringing out Dizzee is a bigger moment, now I’m a huge Drake fan and he’s probably my favourite rapper so I was super gassed about the performance of Shutdown with Skepta but the gut feeling I had when I found about Stormzy and Dizzee was different. When I watched it back the moment itself just seemed huge, Stormzy is the next to blow I feel internationally for us and to have Dizzee up on stage with him felt right.

Internationally there is no question Drake bringing out Skepta was huge but for the UK Stormzy bringing out Dizzee was just as big of a moment in the UK.